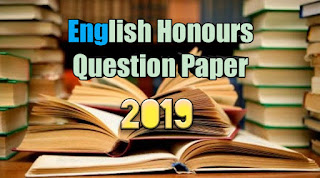 The figures in the margin indicate full marks

Candidates are required to give their answers in their own words as far as practicable.

Group — A (History of English Literature)

1. Answer the following questions :
(a) Name one Old English heroic poem.
(b) Who wrote The Faerie Queene?
(c) Who wrote The Spanish Tragedy?
(d) Name one play by William Congreve.
(e) Mention a novel by Henry Fielding. Ix5

(a) Assess the importance of Geoffrey Chaucer.
(b) Comment on the importance of the University Wits in the history of English drama.
(c) Write a short essay on the rise of the novel in the 18th century with special reference to any two novelists.

(a) Write a short note on the Anglo-Saxon Chronicle.
(b) Briefly discuss Ben Jonson's Comedy of Humours.
(c) Show your acquaintance with Congreve.

4. Answer the following questions :
(a) Name one pre-Romantic English poet.
(b) Name one poem by W. B. Yeats.
(c) Who wrote Wuthering Heights?
(d) one drama by John Osborne.
(e) Who wrote Biographia Literaria?

(a) Briefly discuss the importance of W. B. Yeats.
(b) Write a short note on David Copperfield.
(c) Show your acquaintance with Virginia Woolf.
Group — B
(Philology)

The figures in the margin indicate full marks.

Candidates are required to give their answers in their own words as far as practicable.

1. (a) To what effect does Homer employ the Invocation in the first two books of The Iliad ? Discuss.
15
Or,

2. (a) Would you agree with the view that Sophocles' Oedipus the King is a tragedy of destiny? Give reasons for your answer.
15
Or,

3. (a) Describe the events leading to the rejection of Echo by Narcissus. What was its final outcome?
15
Or,

5. Answer the following questions :     1x5
(a) What favour does Thetis ask of Zeus?
(b) Name the three goddesses who lay claim to the golden apple.
(c) Why was Creon sent to Delphi?
(d) How did Semele's baby survive?
(e) By whom was Phaedria ravished?

What. according to Horace, is the starting point of all knowledge?