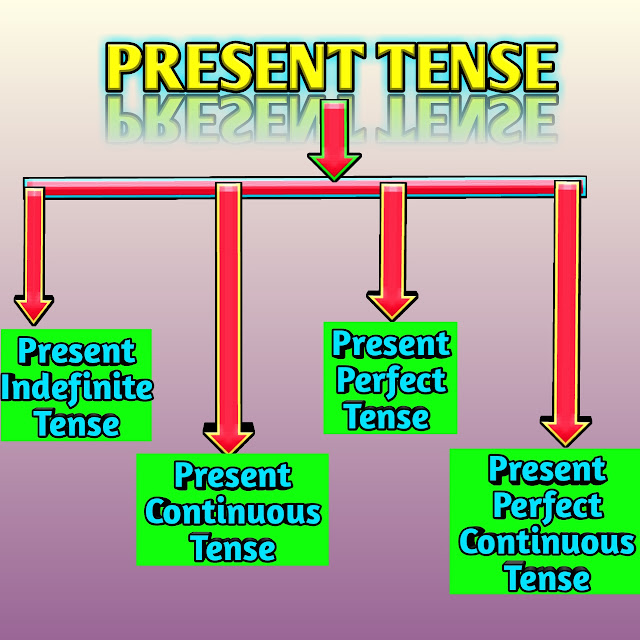 The verbs in all of these tenses refer to the present time and are therefore said to be in the Present Tense.

➡ In this tense the verb shows that the action is mentioned simply, without anything being said about the completeness or incompleteness of the action.
➡️Sub + V + O
If the Subject is Third person singular number then 's' or 'es' will use.
➡️A universal or general truth.
➡️ An habitual or permanent action.
➡️ A future action, when the future is indicated by the contest.
➡️ A present action.
➡️ Past events in order to make the narrative more vivid.
➡️ Quotations from authors.

Present Continuous Tense definition and examples:-
➡ In this tense the verb shows that the action is mentioned as incomplete or continuous that is as still going on.
➡️ S + am/is/are + V + ing + o
➡️ An action going on at present.
➡️ A future action.


Present Perfect Tense definition and examples:-
➡ In this tense the verb shows that the action is mentioned as finished, complete, or perfect at the time of speaking.
➡️S + has/have + v (Past Participle form)
➡️ Present perfect tense is used when the work has been done but its effect lasts.
➡️ To express an action just finished.
EXAMPLE:-

➡ In this tense the verb shows that the action is going on continuously and not completed at this present moment.
➡️S + has/have + been + V + ing + O
➡️The present perfect continuous tense is used for an action which began at some time in the past and is still continuing.